Counter-Strike 1.6 vs. Call of Duty 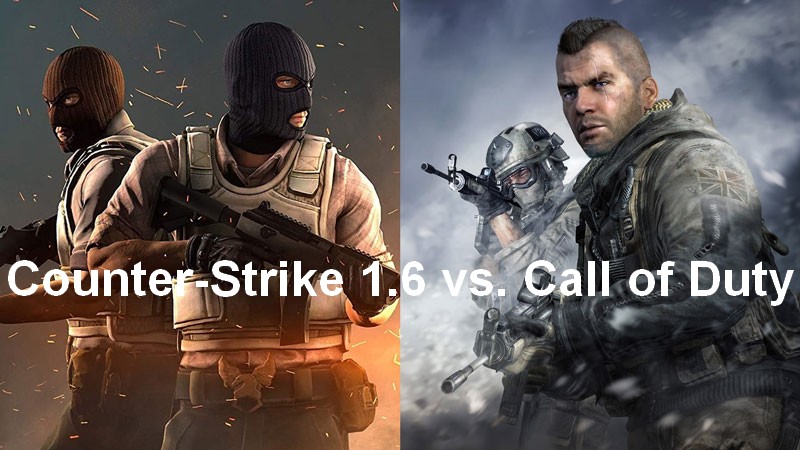 Counter-Strike 1.6 vs. Call of Duty

If you look at the current first-person shooter gaming industry, Counter-Strike and Call of Duty are the two big names. The main focus of both games is to provide players with a realistic gun-slinging experience. Both games have different features, but Counter-Strike is more popular than both games. There are a large number of competitive Counter-Strike leagues all around the globe, making it a brand.

Call of Duty is known for its standard game modes. There is a competitive multiplayer mode in the game, but it’s not the main attraction for the gaming community. Competitive gamers like Counter-Strike, while an average gamer opts for the Call of Duty instead.

What is Call of Duty?

Call of Duty is a first-person shooter which was released in 2003 by an American development company called Infinity Ward. It won various awards between 2003 and 2004, all thanks to its graphics and game systems. The game enables you to dive into World War 2 and fight Nazi forces as an American, Russian, and English soldier in various battles.

Although the single-player campaign of Call of Duty, there is a multiplayer mode so you can quench your thirst for fighting with real-life players. Revive your fallen platoon mates or pick up the guns of your enemies to kill them. Throw a grenade to clear up a bunker filled with Nazis without firing a single bullet. There are only two maps in the entire game, making the game boring after some time.

Counter-Strike is known for introducing a large number of advanced first-person shooting features which acted as a base for upcoming games. It started in 1999 as a mod of Half-Life but was later released as a standalone title given its popularity. Two teams enter an enclosed virtual map to engage in several rounds of fights. One team has to either defuse the bomb or rescue hostages from terrorists, and this team is called the anti-terrorist squad. The second team is called terrorists, and they have to plant the bomb or kill the anti-terrorist squad in the given time.

When it comes to maps, Counter-Strike is considered pretty rich because it features a large number of classic maps, including Inferno, Nuke, Train, Dust, etc. While some of these maps come up with the base game, there are various other maps created by veteran counterstrike players. Its weapon arsenal is filled with powerful sniper rifles, assault rifles, SMGs, LMGs, shotguns, and pistols.

With the extra money, you can buy equipment such as grenades, smoke bombs, flashbangs, night vision goggles, and protective vests. It defined what competitive shooter games should look like. These rounds are time-based, and you won’t get any kills if you leave before the match ends. Various other mods and maps were added to the game later, but the base version of Counter-Strike 1.6 is quite popular as it took developers three years to develop it.