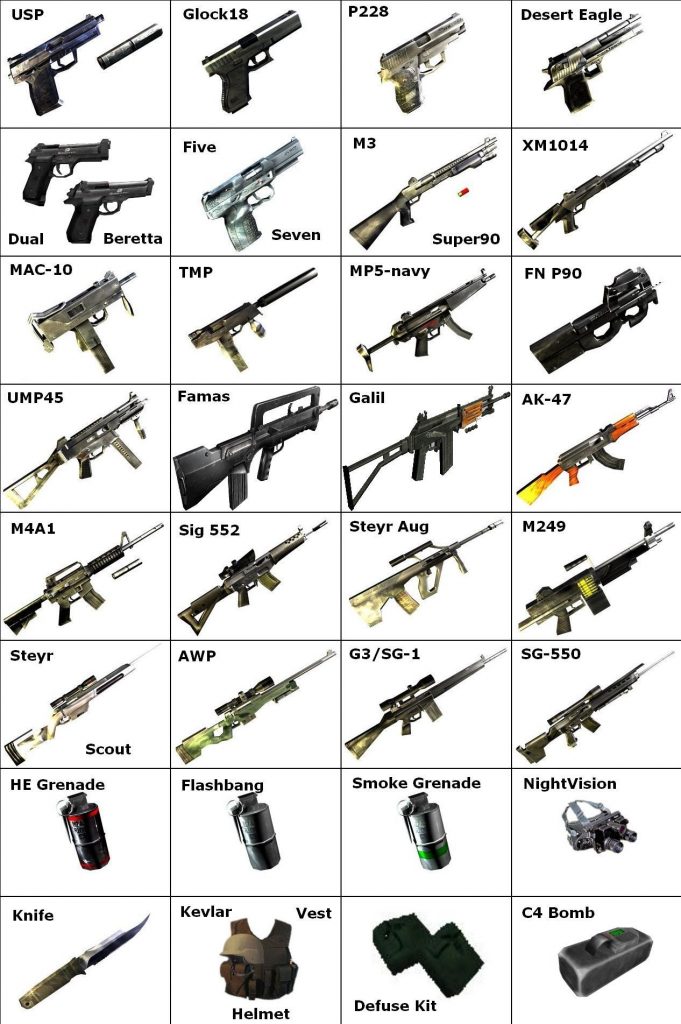 Counter-Strike 1.6 was one of the most popular first-person shooter games in the early 2000s, and it’s still played today thanks to its simple gameplay rules and fast pace. When you’re playing Counter Strike 1.6, you want to know what weapons you’ll have at your disposal, and which ones will be the most useful to you.

Types of weapons in Counter Strike 1.6

Weapons in Counter-Strike 1.6 are divided into three categories: rifles (including submachine guns), heavy weapons, and pistols. Each gun has its own unique characteristics, including damage rate, accuracy, range, fire rate, etc., so choosing the best weapon in Counter-Strike 1.6 for your playing style is crucial for success.

Pistols are the cheapest weapons in Counter-Strike 1.6, but they’re also the weakest. Pistols can deal a lot of damage if they’re aimed correctly, but they take much longer to reload than other weapons. They’re most useful when a player has very little money (less than $300) and has run out of ammunition for their primary weapon. The cheapest is the P228 ($200), and it’s also the only pistol that can take a silencer (for an additional $250). The Glock is accurate, easy to use with one hand, and has a high fire rate—but its damage per shot is low and there aren’t many firing modes available. The USP 45 is similarly accurate as of the Glock but deals more damage per round.

Rifles and shotguns are more expensive weapons in Counter-Strike 1.6 than pistols and submachine guns, but their advantages make them worth the cost to many players. Rifles are very accurate over long distances and do quite a bit of damage; however, they do not fire as quickly as SMGs or shotguns. Shotguns are most effective in close combat, but they often take multiple shots to kill an opponent. The sub-machine guns (SMGs) are the next cheapest and pack more firepower than the pistols. Many players prefer to use SMGs over full-blown rifles due to the weight advantage.

The most important weapons in Counter-Strike 1.6

With a single grenade, you can kill multiple enemies at once or even an entire team, depending on how well you aim it. The knife is an instant kill weapon in Counter-Strike 1.6 that you can use as you rush into an enemy stronghold or while you’re in a 1v1 situation against another player. Both of these are essential weapons to your success in Counter Strike 1.6 and mastering how to use them will make or break your gameplay experience.

The best weapons in Counter-Strike 1.6

Of course, when it comes down to actually playing and choosing weapons in Counter-Strike 1.6, your skill and strategy are going to be the deciding factor in whether or not you win. But even if you’re a master of playing Counter-Strike 1.6, knowing which weapons work best in certain situations can give you an edge.